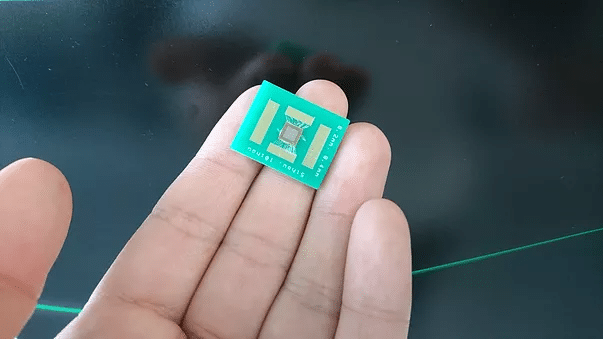 X-ray photon have short wavelength and higher energy and thus are quanta particle in nature. These high energy photons when interact with material generates proportional amount of charge. The detectors capable of resolving each interaction of diverse energy photons is referred to as photon counting technique. CdTe having wide bandgap is capable of resolving these broad range photon energies at room temperature operations.

We utilize this photon counting capabilities to our CdTe image sensor and developed our own LSI that can perform photon counting on each pixel simultaneously. Since it is possible to determine each photon quantitatively instead of threshold-based categories; it can concurrently demonstrate two order sensitivity compared to conventional sensors wavelength information. The capability of registering energy and number of photons, it is possible to extract information that was previously hidden and enables us to acquire images with extremely high contrast and dynamic range.

Since signal is processed for individual incident photon, the amount of charge generated at the sensor is processed at the same instance. After computational analysis it allows us to make direct proportional relationship between photons wavelength and detected signals. Unlike visible light, X-rays cannot be separated by color using filters, therefore this method is currently attracting attention as a practical technique for imaging with X-ray wavelength information. Getting wavelength information in photon counting is referred to as “spectrum”, and in CT imaging it is called Spectral X-ray CT.

Until now, such X-ray cameras have been used only by advanced laboratories for particle physics and astrophysics and were massive in scale and cost. We have developed reasonable photon counting circuit for the industrial applications, Thus, we have realized an X-ray spectrum camera that can be used for various industrial a or medical applications and can utilize wavelength information more easily.